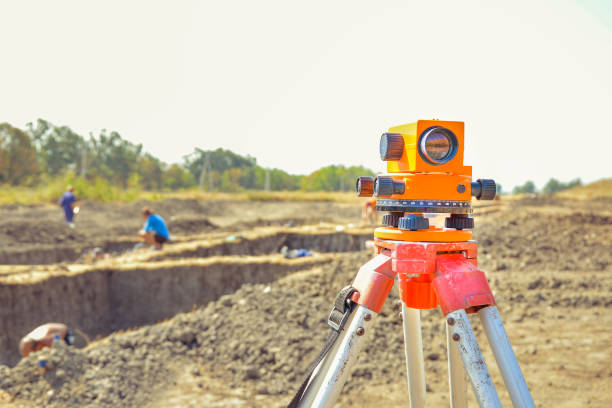 There are many types of land surveying, employed for different purposes and using different techniques.

An archaeological field survey is an assessment of archaeological sites or finds, where their locations are plotted in a landscape. Laser surveying can produce 3D computerised models of artefacts.

A bathymetric survey will map the bed of an ocean, lake, river or otherbody of water. Bathymetric surveys are used to measure the depth below sea level at certain points, whereas a hypsometry survey measures the height of the land above sea level. The depth measurement is likely to be carried out with the use of sound measuring such as sonar and global positioning (GPS) will measure this position on the earth’s surface.

A boundary survey will establish the legal boundaries of the land. Boundary surveys will ascertain the corners of a ‘parcel’and may involve the setting or restoration of monuments or markers to mark these boundaries.

Deformation surveys are used to check for and measure change. They use geodetic measuring devices, geotechnical measuring devices and other techniquessuch as radar measuring devices. Deformation can apply to dams, roads, mines, settlements or volcanoes, and these can all be measured with this type of survey. Laser scanning is one method that can achieve an accurate measurement of deformation.

Engineering surveys may use topographic, layout or as-built surveys, but feature more detailed data.These can be carried out using a number of methods, including laser surveying.

A foundation survey is carried out to collect the positional data of construction foundations. These surveys are used to assess whether foundations have been laid at the planned depth and location.

geologically significant features of an area. This is a general term and can describe other types of survey.

Hydrographic surveys map the coastline and seabed and are used in navigation and engineering.

A building surveyor ‘as-built’ survey are types of measured survey, which is a general term to describe the survey done to produce plans of abuilding. Measured surveys can be carried out using any method of surveying, and may include laser surveying.

Mortgage surveys are also called physical surveys. They are carried out to determine land boundaries and building locations. Sometimes one of these surveys maybe required before a lender will approve a mortgage loan.

A structural survey is often used by people buying a new home. Structural surveys inspect the structural stability of a building or structure and will make note of their condition and what work may need doing.

A topographic survey marks the elevation of the land and presents these points as contour lines. These can be carried out in a number of ways including triangulation and laser surveying techniques, and may or may not include surface features such as trees and plants.